The BOMB mission editor is a powerful tool.

It’s really different from classical mission creator tools often released with flight sim games such as Il-2 or DCS because it’s based on the level editor of our multi purpose game engine.

You may find that the mission creation workflow isn’t as simple as in other titles in the genre but one can achieve much more customized mission and objectives.

Let’s start with an overview of the interface.

Note: the editor is only available on Windows for now.

Locate and execute the MissionEditor.exe file in the [game’s folder]/Bin/Release/ folder.

If you’re using Steam, a convenient way to locate it is to click on Browse local files in the Local files tab of BOMB’s Properties. 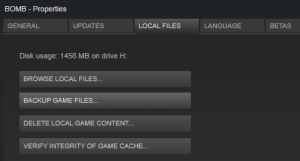 When you launch MissionEditor.exe it can be a long loading time takes some time as it will load all game’s resources at once.

Open the Free_flight level by double clicking on it in the left-side tree view.

You can navigate inside the level by using the viewport (the 3D view).

For convenience the campaign, skirmish and race levels are hidden, displaying only what we’re calling external missions, which are single missions created by us, and hopefully, you 😉

Double click on a level to load it in the editor.

Level’s objects are sorted by layers (the green icon). The level’s layer always has the same name as the mission. This is where your objects are located.

Script files are visible in the scripts folder.

You can select object by either pick them in the viewport with the left mouse button or either by clicking on their name in the tree view.

Basic manipulation of objects in the level are done by dragging the gizmos, wich allow to change objects position, orientation and scale (but avoid as much as possible to change the scale).

You can edit the object’s properties directly in the Properties view. 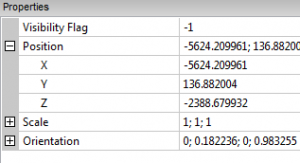 When an object is selected, its properties are automatically populated.

Let’s get started in part 2!